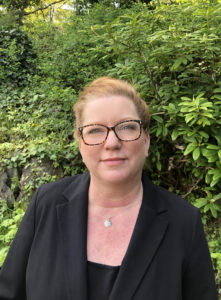 Marion lives and works in the unceded territory of the lək̓ʷəŋən People.  She is a graduate of Vancouver Community College’s paralegal program and has worked in a broad range of capacities in the legal field since 1990. Marion began her career as a law firm receptionist before moving on to more advanced administrative support from 1991-1999 with a respected senior lawyer. She also assisted a lawyer working with hundreds of Residential School sexual abuse survivors which continued through 2018. In addition, Marion has provided freelance paralegal services for many years.

Marion has also been an educator sharing her knowledge and experience as a term instructor at Camosun College from 2015-2017.

Marion is a Past Member of the West Coast Legal Education and Action Fund, the Canadian Paralegal Institute’s ‘PLUG’ (Paralegal Users Group) and of the Amici Curiae Pro Bono Paralegal Program. She is a member of the Independent Contractors Association of BC and the BC Paralegal Association.  After serving four years on the Board of Directors of the Better Business Bureau of Vancouver Island (2021 as Chair), Marion has retired from the board.

Marion’s hard work and dedication were recognized when she was awarded the 2015 Victoria Bar Association’s Linda Barnes Award – presented annually to a non-lawyer who exemplifies proven excellence, professional courtesy and longstanding devotion in the service of the legal community.